The theme for Rain's Thursday Art Date this week is silver and gold. Since I've been doing the "colourful June" series with photos of flowers and garden, I admit I was stumped about silver and gold. I usually think of these as metallic colors, although with flowers, golden yellow is sometimes called gold, or silver grey is sometimes called silver.

After some pondering, I decided to exercise some artistic license and interpret silver and gold metaphorically. So, I present to you, my homestead silver and gold.

Honestly? These things are worth more to me than money in the bank.
These are our homestead silver and gold.
at June 30, 2022 10 comments:

June purple from my garden for Rain's Thursday Art Date. 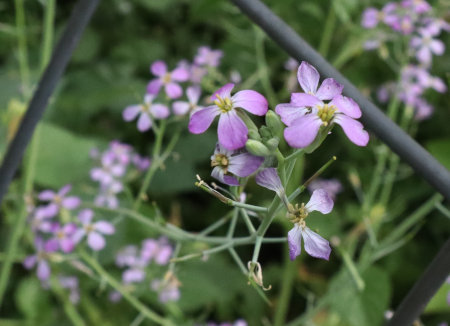 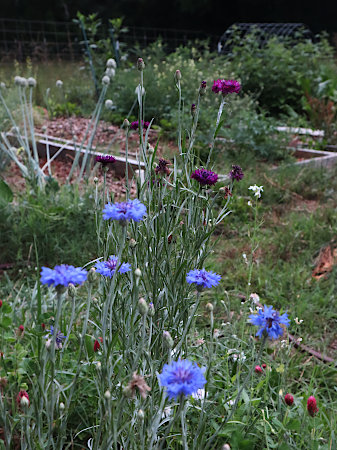 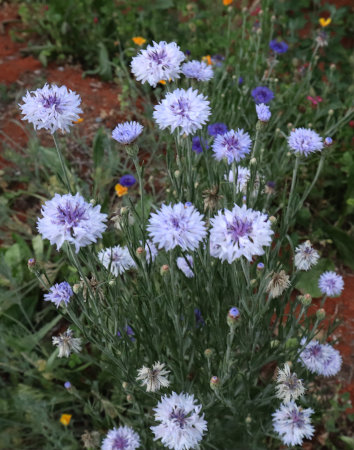 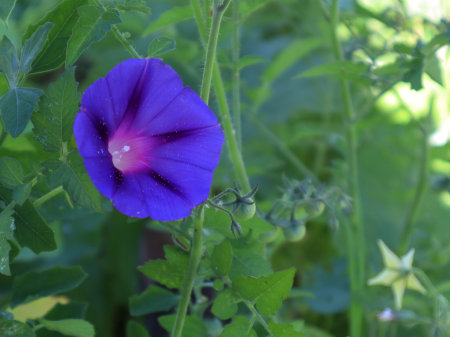 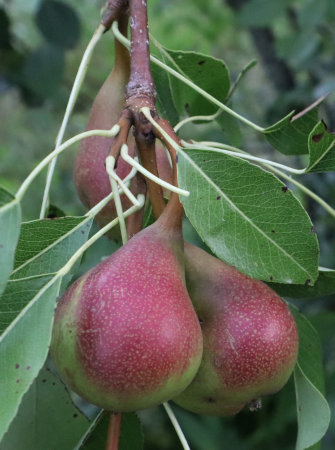 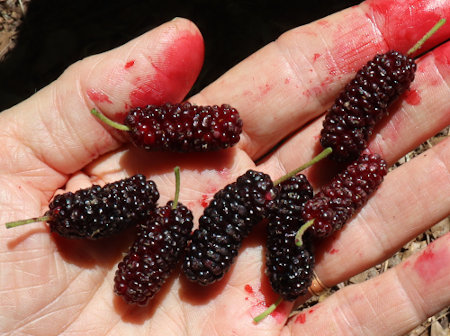 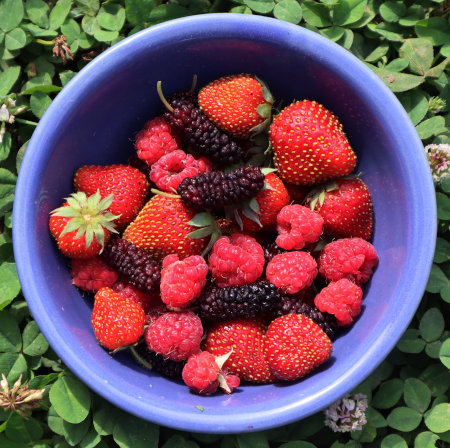 My interest in photography is primarily in documentation, so my aim is to make my photographs as accurate as I can in terms of getting them look like what my eyes see. Cameras don't see the same as human eyes, so learning how to take real-looking photographs has been a goal. However! Rain's Thursday Art Date gives me an opportunity to explore photography as an artistic medium. I can experiment with settings and software editing in ways I otherwise wouldn't! Very fun.
Last week's lesson in my online photography course was Advanced Edits. That link will take you to what I learned and my homework assignment. I continued to play around with it and here's what I came up with to share for TAD. 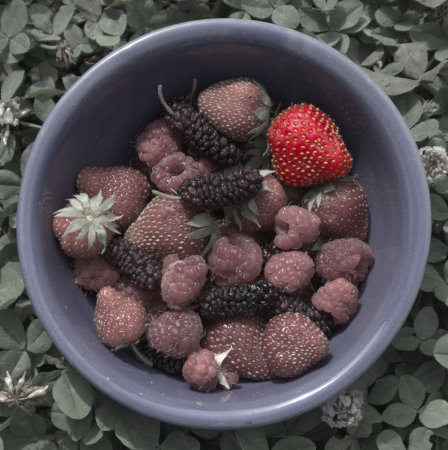 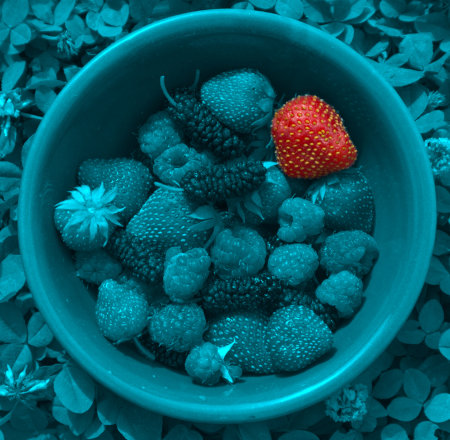 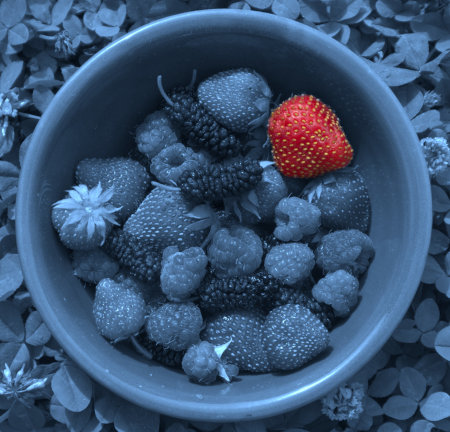 Graduated Filter. This was the first technique I wanted to try. And I knew exactly what image I wanted to experiment with. It's one I took for my homesteading blog last month. The subject was muscadine vines growing on the pergola. The day was sunny and the sky was blue with white and grey clouds. The photograph however, made the sky look like a high overcast. Nothing I tried in GIMP could fix it.

The I loaded the RAW version of the image into RawTherapee, my RAW editing software, and started to experiment.

That second photo looks like what I actually saw! Even though it's been edited with computer software, it's the more accurate image of the two.
Vignette. I understood this better when I started playing with the tool. The first image below is without the effect applied, the rest are gradually increasing it.


Split Toning. Sometimes called "color toning." It is called "color correction" in RawTherapee. This is another one I had to experiment with to understand. For my image, I chose cloudy sky, because everybody knows what sky is supposed to look like.
Here are my experiments. The assignment said not to worry about realism, so I didn't.

I didn't experiment with cloning, because I'm already familiar with it.

Email ThisBlogThis!Share to TwitterShare to FacebookShare to Pinterest
Labels: A Year With My Camera

Rain's Thursday Art Date (hit that link!) is giving me great inspiration to apply what I'm learning in A Year With My Camera, a wonderful free online photography course. This week I'm combining Rain's theme of yellow with the lesson on tonal editing. My edits are made by tweaking shadows, mid-tones, and highlights. The originals are JPEG copies of RAW images before editing.

This week's project
Create at least 2 completely different edits from the same photo, just using the curves tool, or dark tones/light tones sliders.
GIMP has a color curves tool, but not a tonal curve tool for dark, mid, and highlight tones. So my homework was done on RAW images in ART with sliders.
I started by experimenting with images of flowers and goats. I could see changes, but they were subtle as the shadows, mid-tones, and highlights were subtle. This week's project wants two completely different edits from the same photo, so I chose the same scene that I used for last week's project, but under different conditions. In lesson 5.2 the photo was taken before sunrise on a foggy morning. For this lesson, the photo was taken a couple hours after sunrise on a clear morning. I like that it has distinct shadows, mid-tones, and highlights with which to experiment.

In my edited photos, the shadows were lightened the same, but the mid-tones were the opposite and highlights were decreased for edit #2. The changes are subtle, so I suppose it's a matter of which image is instinctively more appealing to the viewer.

What I learned
For my records, here are the individual edits I experimented with before putting them all together.


And because I couldn't leave it alone, here is my tonal edit photo #1 (above), with a few more tweaks.

I have to add that I understand why we were instructed to take our images in the largest size our camera allows. It's a lot easier to see the changes when the image is 6016 pixels by 4012 pixels, than at the 500 x 333 I post on my blog. But the blog posting size is a matter of space and loading time, so while it's a good record, it's not perfect.
<
at June 03, 2022 2 comments:

Email ThisBlogThis!Share to TwitterShare to FacebookShare to Pinterest
Labels: A Year With My Camera, editing, RAW

This one combines TAD with one of the lessons from my photography course. My offering is an exercise in color saturation with the focus on pink. 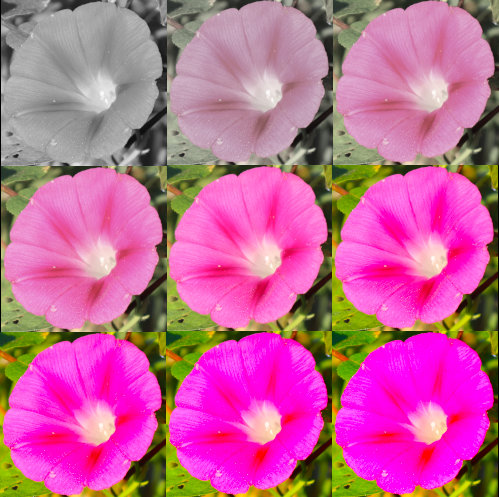 I'm trying to learn two different image editors: GIMP for JPEGs and ART for RAW. So, I've done a set of color edit experiments with each. Initially, I was tempted to include some of the edits we learned in the last lesson, but decided to just experiment with the edits in this lesson to better understand what they do.
The photo was taken on a foggy morning just before sunrise. It's a little bland and could use some color tweaking.
JPEG in GIMP

Email ThisBlogThis!Share to TwitterShare to FacebookShare to Pinterest
Labels: A Year With My Camera, editing
Older Posts Home
Subscribe to: Posts (Atom)

A place to put my photographs for challenges and other projects.